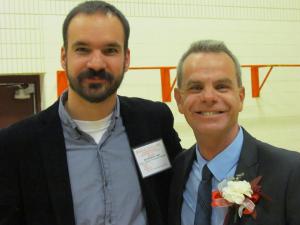 What a great SAGE! I was so lucky to be a part of both the Manitoba Social Sciences Teachers Association (MSSTA) and the Manitoba School Librarian Association (MSLA) conferences. It was also nice see my good friend James Allum (pic) who is the new Minister of Education. Congrats! Great to have a historian as our minister!!

Some of the participants in the sessions I ran today asked if I could share some of the resources on Ecological Literacy and HBC/Idle No More. You asked, so I deliver: 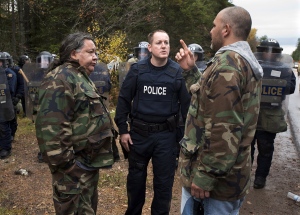 Over the past few weeks, the situation in New  Brunswick related to the potential fracking and mining for natural gas within First Nations and non First Nations communities. Rex Murphy, who comments for both the CBC and the National Post, came out last week with an editorial condemning the protesters and suggesting that the language they are using, that of colonialism, settlers, and genocides, is not appropriate. Here are his words:

“Then there is also an even more deplorable effort to frame the interactions between Canadians and Canada’s aboriginal peoples as a genocide — an accusation both illiterate and insulting.”

Murphy suggests by the title of his piece that Canada has been generous to First Nations and that this generosity has been rudely dismissed.

Here is a National Post video of the standoff: http://fullcomment.nationalpost.com/2013/10/19/rex-murphy-a-rude-dismissal-of-canadas-generosity/#ooid=ozNDcwZzqCFNlZj85MaVf4nWFUD93Rch

In response to this, a blogger by the name of Nick Montgomery responded to Mr. Murphy. Montgomery suggest that perhaps the rhetoric of First Nations protest movements in Canada is very relevant and appropriate.

How are both authors using history to argue their point? What are they missing? Where would you start?

Our Canada in the Contemporary World learning community has begun a global debate with several schools from across the world on the broad theme of sustainability. Through Flat Classroom’s Global Youth Debates, we are currently debating the Vienna International School on the following resolution: Plastic water bottles do more harm than good.  Here is our progress thus far!

Keep checking back for more debates! Here is the link:

September 30th marked the 20th anniversary of the Supreme Court of Canada’s decision in 1993 not to allow Sue Rodriguez the right to seek out a physician-assisted suicide. In Canada, we are still debating the issue and at this point, people are not allowed to assist anyone who wishes to determine when they should die. There have been recent cases, like that of Gloria Taylor, which have brought this issue to the forefront of Canadians.

Just last week, Dr. Donald Low released a filmed interview only days before he died advocating for his right to choose when to die. You can view his testimony here:

Where do you stand on this issues? Is it a question of moral reasoning or does the Charter of Rights and Freedoms suggest that we should be moving a head on this issue? Please respond by using evidence from the Charter and other cases. Here is the Supreme Court Decision. What did the nine justices decide and what rationale did they provide?