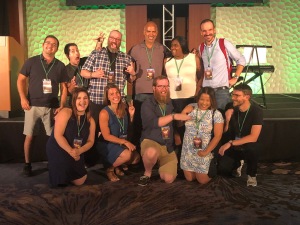 My Christmas comes in July. (As a European mutt, this pagan/Christian event resonates within my experience as a generally positive one.) As a principal of a Big Picture Learning school in Winnipeg, Canada, I relish the opportunity every summer to head to Big Bang, the BPL conference where educators who care deeply about learner-centred learning come together to exchange ideas, refine our practice, and engage in conversations which focus on creating powerful and educative learning experiences for learners.

At “The Bang”, we don’t speak of test scores, discipline, or timetables. Our shop talk is focused on learners, on advisories of learners, on deep internships which produce rich and authentic opportunities for growth and transformation, and on developing schools and learning environments which seek to foster curiosity, learner agency, and where flourishing young people is our priority. (And learners come to our conference, offer sessions, and even emcee our plenary sessions.)

There are also opportunities for mischief each year, which may or may not result in a group of 600 educators and learners being led by the South Atlanta High School Marching Band through the streets of downtown Atlanta. But this has yet to be confirmed.

If you are serious about impacting young people and providing them with authentic, real-world, and rigorous learning opportunities, you need to visit a BPL or Met School (There are two in Winnipeg) and/or head to Big Bang next year.

Beyond the deep sessions, the Leaving to Learn opportunities, advisory, and the impromptu conversations with outstanding leaders in the field of education, I look forward each year at Big Bang to the deep thinkers from across the world who tend to gravitate towards this conference.

This year I was really excited to see that Ted Dintersmith, the creator of the book and film Most Likely to Succeed, was being honoured by Big Picture Learning. Ted recently published another book, What School Could Be, based on a year of traveling throughout the United States and gathering narratives of what innovative educators are doing in order to prepare learners for a changing world. In this book, Ted argues that the world learners are entering post graduation has nothing in common with how the majority of schools are currently designed.

Most Likely to Succeed Trailer from One Potato Productions on Vimeo.

The industrial model of 1893, which is still alive and well in the 21st century, is not able to prepare learners for a future where climate change is and will impact us all, where technology and AI will make many jobs obsolete and where they will fundamentally change how we live and interact with each other.

Simply put, multiple choice tests, compliance-based curricula, and worksheets will not prepare learners for a world that Ted argues “where machine intelligence excels in manual and cognitive tasks: a world stripped of the routine white and blue collar jobs that are the backbone of today’s society. This is happening faster than we think.” (2018, p. 13).

Coupled with this problem is that our schools also need to prepare leaners for what Henry Giroux, famed educational philosopher and pedagogue, calls in his new book American Nightmare, “manufactured ignorance.” Giroux, who eloquently outlines how the United States has become a fascist state under Trump, speaks to a need to shift education towards deep, critical thought that is based in historical and critical analysis. What we have created in Canada and the United States is an environment where consumerism and self-interest are celebrated, tweeted, and emulated, while racism and intolerance are on the rise. This is all at the expense of the most vulnerable and the planet itself. Destruction has become normalized.

As Dintersmith and Giroux collided in my mind, it reinforced the fact that Big Picture Schools are well-situated to provide learning environments which not only foster the critical and historical thought necessary to combat fascism, but also to prepare learners for an uncertain future. Climate change will create greater instability, human suffering, and as we see, greater frequency of global conflict.  Technology will most certainly increase to the point where food, healthcare, transportation, manufacturing and countless other fields will rely on robot power and not human.

The antidote to this manufactured ignorance, a society focused on shortsighted decisions and instant gratification (akrasia), potentially rests in learner-centred schools where the standards of a past century are replaced with a new imperative. Dennis Littky the co-founder of Big Picture Learning, referred to this new imperative at Big Bang as a line of questioning that had young people ask themselves: “What pisses me off?”

Don’t we want learners of all ages to be asking questions about poverty, inequality, climate change, the inequitable distribution of wealth, racism, xenophobia, homophobia, sexism, etc.? Big Picture Schools are uniquely designed to allow this space for learners to identify a problem, research its origins and then propose, prototype, and launch meaningful solutions.

We are also in a position to help our learners dive deep into critical issues of justice — be it social, environmental, economic, or otherwise — so that they are able to deconstruct the onset of fascism through an historical and critical lens. Don’t we want learners who are media literate, who care about the planet, who question government policy, and who are actively engaged in creating democratic discourse and spaces? And this is not a Left versus Right discussion. I have many conservative friends who perpetually argue for these elements to be be cultivated in schools.

In order for this to happen, learners need time and space to think, they need the opportunities to engage with experts in the field, they need internship opportunities where they can be mentored by adults with integrity. Their curiosity and passion need to be cultivated and unleashed. Their understanding of the universe needs to be challenged and broadened to create solutions for a better and more just world.

They need to learn skills and mindsets, as Ted argues, that will provide fulfillment in an automated world.

This is not to suggest that my school or any other BPL school has mastered this. Far be it. But at the Big Bang, these are the conversations which I am drawn to. The ones started by Dintersmith and Giroux which are carried out in quiet discussions between passionate educators who wish a better future for the young people who are in our care and who we care for deeply.